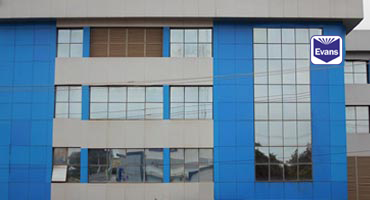 Evans Brothers was founded in 1903 by two brothers Robert and Edward Evans. In 1945, it launched in Nigeria the Larcombe’s Progressive Arithmetic (Lower, Middle and Upper Standard) series which dominated the primary arithmetic market in Nigeria in the 1950s, 1960s and 1970s. The company was formally incorporated in Nigeria on 6 December, 1966. On December 6, 2016, it celebrated its golden anniversary of incorporation and successful operations in Nigeria.

Over the years since incorporation, the Company has been led by distinguished personalities, both at the Board and Management levels as follows:

The incumbent Chairman of the Board of Directors of the company is a well-known and accomplished Nigerian aristocrat, the Oloye Adekunle Ojora, CON, OFR, JP, Otunba of the Yoruba kingdom of Lagos.

An accomplished entrepreneur, Otunba Ojora’s wealth of experience and leadership brought the company through the difficult years of the harsh economic difficulties of the mid 1980s and the subsequent Structural Adjustment policies that followed thereafter. As Chairman, he leads other   distinguished and accomplished members of Board of directors consisting of

The company’s core business is Educational publishing of school textbooks from Pre-Primary School to University education.  Its range of titles cover virtually every subject taught in the school system. With branches spread over several state capitals, it provides ready services to its customers all over Nigeria.

The company views its contribution as essential towards the survival of the Nigerian Education Industry, hence its slogan “Evans, Years ahead in Publishing’’

The company has been an ardent supporter of educational policies of government at Local, State and National levels.  It has partnered and continues to collaborate with private organisations and Voluntary Agencies in the areas of innovation in educational service delivery.

From the days of Dr. Larcombe who authored the very successful Larcombe Mathematics series till now, its products have withstood the test of time.

In 1989 to 1990, it participated in the “Federal Government Secondary School Book Intervention Project”. It distributed books to the 19 states of the Federation with other publishers.

In 1990-91, in conjunction with the “Project Implementation Unit” (PIU) of the Federal Ministry of Education, it pioneered the use of “Continuous Assessment Records” in primary schools in the entire Federation. Evans produced and distributed 14 titles to the then 21 states of the federation. It was a massive project which was executed successfully.

Between 1995 and 1997, Evans participated in the World Bank Book Intervention Project in Nigeria.  It was one of the few publishers that produced and distributed primary school books to every state of the Federation.

In 1999 to early 2000s, with the advent of the 3rd Republic and the promulgation of the Universal Primary Education Act, Evans has been participating in book supplies and training need of States Primary Education Boards.

PUBLISHING IN OTHER MEDIA

With the growth of Information Technology and its increasing application in education all over the world, Evans has been at the forefront of the development of an accounting/management software called The Integrated School Manager — a dedicated, robust computer software developed for running schools. It contains modules on accounting, human resource management, student records, scheduling etc. This application has revolutionized the way schools are run in Nigeria as most schools have keyed into it.

Evans estore is an online book hub that enables customers access and make purchase of Evans and Nelson Publishers’ titles.  The platform contains the synopsis and price of all titles.  Delivery of titles selected and paid for online is made within a period of 3-7 days depending on location.

Evans eStore app is available for download on Google Play Store. You can also visit www.evanspublishers.com/estore to browse the link on all devices.

Evans Publishers recently launched an e-Book application where titles can be accessed anywhere on any android run device. The package is an extraordinary, self contained, stand alone set of tools for all levels of education. Evans provided contents for the “Opon Imo” Project for Osun State Government in 2012/2013. The contents covered eBooks for seventeen (17) subjects on tablet for SS1 to SS3 students in the State.

The Core Values for Evans Brothers (Nigeria Publishers) Ltd, is based on the word QUEST, an acronym for Quality, Unity, Empathy, Serenity and Tenacity.

As a publishing house, it ensures quality in all its operations to remain ahead of competitors.

This is essential for its survival and in sustaining the confidence of its customers.

Its customers are its partners in progress and collaborators in ensuring the delivery of quality service to our beloved country.

It provides a serene environment for the motivation for staff members to do more by going the extra mile.

The determination to succeed against all odds is a key factor in the organization.

It is often said “where there is a will, there will be a way.” A never “say die” attitude and confidence in our ability coupled with a positive outlook about life stands Evans out.